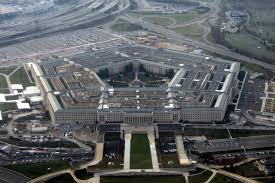 The latest estimate is up from $30.7 trillion in 2018 and $29 trillion in 2017, the first year adjustments were tracked in a concerted way, according to Pentagon figures and a lawmaker who's pursued the accounting morass.

The figure dwarfs the $738 billion of defense-related funding in the latest U.S. budget, a spending plan that includes the most expensive weapons systems in the world including the F-35 jet as well as new aircraft carriers, destroyers and submarines.

"Within that $30 trillion is a lot of double, triple, and quadruple counting of the same money as it got moved between accounts," said Todd Harrison, a Pentagon budget expert with the Center for Strategic and International Studies.

The Defense Department acknowledged that it failed its first-ever audit in 2018 and then again last year, when it reviewed $2.7 trillion in assets and $2.6 trillion in liabilities. While auditors found no evidence of fraud in the review of finances that Congress required, they flagged a laundry list of problems, including accounting adjustments.

The Nobel Peace Prize Is A Sick Joke