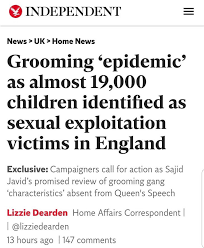 The Department of Education revealed that more than 18,700 suspected victims of child sexual exploitation were identified by local authorities in England in 2018-19, a major increase from 3,300 reported in 2013. The Home Secretary noted that most abusers in high-profile grooming cases were of Pakistani heritage. They targeted vulnerable girls, particularly those in care (foster homes), on welfare or with learning difficulties. Every seven minutes in the UK an alleged crime is committed against a child, including rape and sexual assault, amounting to a total of 76,204 crimes against children reported in the UK during 2018 -2019.

A charity has called for a "radical rethink" of efforts to prevent sexual grooming after The Independent revealed that almost 19,000 victims have been identified in a year.

The NSPCC said victims may be left struggling for the rest of their lives with the trauma of their abuse.

"We are facing a nationwide crisis in the help available for thousands of children who have often suffered the most appalling abuse," a spokesperson said.

Assange's US Extradition Hearing Opens Monday: The Fight for the Free Press Is Now On

Londoners rally for Assange ahead of extradition hearing

Farage: 'We Didn't Free Britain From Brussels Only to Bow Before Beijing'