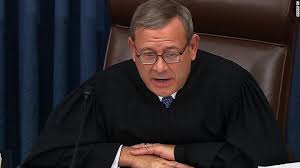 Chief Justice John Roberts admonished House managers and lawyers for President Trump during a 1 a.m. fireworks display Wednesday morning, after a marathon session between the legal teams - remind them to "remember where they are."

Nadler accused Senate Republicans and President Trump's defense team of orchestrating a "cover-up," which drew a sharp rebuke from White House counsel Pat Cipollone - who added that Nadler "should be embarrassed" over his remarks.