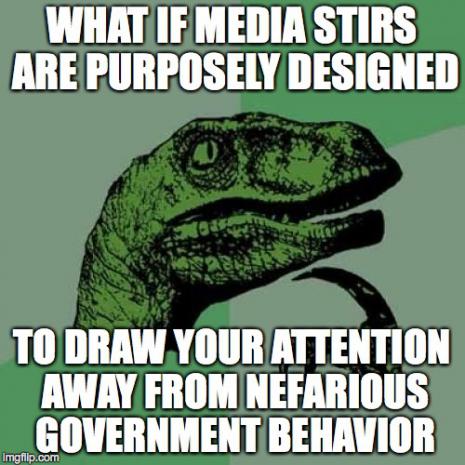 "Pity the nation oh pity the people
who allow their rights to erode
and their freedoms to be washed away…"
—Lawrence Ferlinghetti, poet

And so it continues.

This impeachment fiasco is merely the latest in a never-ending series of distractions, distortions, and political theater aimed at diverting the public's attention from the sinister advances of the American Police State.

Don't allow yourselves to be distracted, diverted or mesmerized by the cheap theater tricks.

This impeachment spectacle is Shakespearean in its scope: full of sound and fury, signifying nothing.

Nothing is the key word here.

Despite the wall-to-wall media coverage, nothing will change.

Mark my words: the government will remain as corrupt and self-serving as ever, dominated by two political factions that pretend to be at odds with each other all the while moving in lockstep to maintain the status quo.

So President Trump's legal team can grandstand all they want about the impeachment trial being "an affront to the Constitution" and "a dangerous perversion of the Constitution," but that's just smoke and mirrors.

You know what is really "an affront to the Constitution"? The U.S. government.

We've been losing our freedoms so incrementally for so long—sold to us in the name of national security and global peace, maintained by way of martial law disguised as law and order, and enforced by a standing army of militarized police and a political elite determined to maintain their powers at all costs—that it's hard to pinpoint exactly when it all started going downhill, but we're certainly on that downward trajectory now, and things are moving fast.

The republic has fallen.

The Deep State's plot to take over America has succeeded.

The American system of representative government has been overthrown by a profit-driven, militaristic, corporate oligarchy bent on total control and global domination through the imposition of martial law here at home and by fomenting wars abroad.

Even now, we are being pushed and prodded towards a civil war, not because the American people are so divided but because that's how corrupt governments control a populace (i.e., divide and conquer).

These are dangerous times.

These are indeed dangerous times but not because of violent crime, which remains at an all-time low, or because of terrorism, which is statistically rare, or because the borders are being invaded by foreign armies, which data reports from the Department of Homeland Security refute.

No, the real danger that we face comes from none other than the U.S. government and the powers it has granted to its standing armies to rob, steal, cheat, harass, detain, brutalize, terrorize, torture and kill American citizens with immunity.

The danger "we the people" face comes from masked invaders on the government payroll who crash through our doors in the dark of night, shoot our dogs, and terrorize our families.

This danger comes from greedy, power-hungry bureaucrats on the government payroll who have little to no understanding of their constitutional limits.

This danger comes from greedy politicians and corporations for whom profit trumps principle.

You want to know about the state of our union? It's downright scary.

Consider, if you will, all of the dastardly, devious, diabolical, dangerous, debilitating, deceitful, dehumanizing, demonic, depraved, dishonorable, disillusioning, discriminatory, dictatorial schemes inflicted on "we the people" by a bureaucratic, totalitarian regime that has long since ceased to be "a government of the people, by the people and for the people."

Americans have no protection against police abuse. It is no longer unusual to hear about incidents in which police shoot unarmed individuals first and ask questions later, such as the 16-year-old teenager who skipped school only to be shot by police after they mistook him for a fleeing burglar. Then there was the unarmed black man in Texas "who was pursued and shot in the back of the neck by Austin Police… after failing to properly identify himself and leaving the scene of an unrelated incident." And who could forget the 19-year-old Seattle woman who was accidentally shot in the leg by police after she refused to show her hands? What is increasingly common, however, is the news that the officers involved in these incidents get off with little more than a slap on the hands.

Americans are little more than pocketbooks to fund the police state. If there is any absolute maxim by which the federal government seems to operate, it is that the American taxpayer always gets ripped off. This is true, whether you're talking about taxpayers being forced to fund high-priced weaponry that will be used against us, endless wars that do little for our safety or our freedoms, or bloated government agencies such as the National Security Agency with its secret budgets, covert agendas and clandestine activities. Rubbing salt in the wound, even monetary awards in lawsuits against government officials who are found guilty of wrongdoing are paid by the taxpayer.