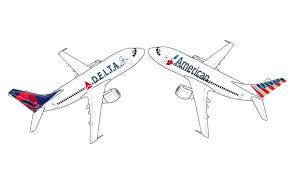 Absurdly Driven looks at the world of business with a skeptical eye and a firmly rooted tongue in cheek.

It's hard to be put upon.

For American Airlines, 2019 involved diatribes from customers, often business travelers, Wall Street and seemingly every customer on Twitter. Why, even American's own pilots now pointedly praise airlines like United -- yes, that United --, while deriding their own.

United was a pejorative. It was the (industry) trailer. American was on the other end. American now is the new United. We don't like that. We want to win.

And last week, American was declared by the Wall Street Journal to be the worst of America's major airlines. Yes, it came below Frontier, Allegiant and Spirit.

By contrast, Delta managed to take step after step that differentiated it from the rest. Few would dispute it's the best of the biggest. The Journal put it on top.

I thought, then, I'd perform a test. On a recent business trip, I flew from San Francisco to Miami on American, returning on Delta. Both trips would be in First Class, the place where airlines like to make the most money.