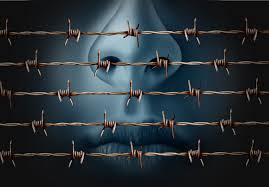 That same month, Chancellor Angela Merkel, in a speech to the German federal parliament (Bundestag), advocated more restrictions on free speech for all Germans. She warned that free speech has limits:

"Those limits begin where hatred is spread. They begin where the dignity of other people is violated. This house will and must oppose extreme speech. Otherwise, our society will no longer be the free society that it was."

Critics, however, would claim that curtailing freedom in order to protect freedom sounds a bit Orwellian. One of the first acts of any tyrant or repressive regime is usually to abolish freedom of speech. Merkel should know this: she lived under a repressive regime -- in the communist dictatorship of East Germany, where she studied at Karl Marx University.

The First Amendment to the United States Constitution protects freedom of speech, specifically speech critical of the government, and prohibits the state from limiting free speech. The First Amendment was placed first in the Bill of Rights because the American Founding Fathers realized that freedom of speech is fundamental to a free society. US President George Washington said: