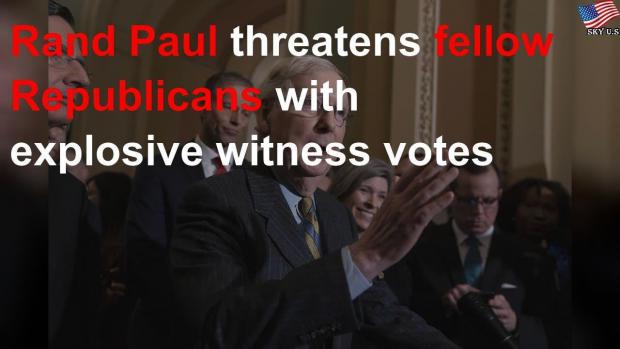 The Kentucky senator is vowing to squeeze vulnerable GOP incumbents if they side with Democrats during Trump's impeachment trial.

Sen. Rand Paul is waging a fierce campaign to prevent the Senate from hearing witnesses in Donald Trump's impeachment trial, vowing to force tough votes on his fellow Republicans if they break with the president or back Democrats' demands for new evidence.

The Kentucky Republican is occasionally at odds with Trump, from his killing of Iranian Maj. Gen. Qassem Soleimani to his national emergency to build his southern border wall. But when it comes to impeachment, Paul is taking the hardest line possible in Trump's favor.

Paul says if four or more of his GOP colleagues join with Democrats to entertain new witness testimony, he will make the Senate vote on subpoenaing the president's preferred witnesses, including Hunter Biden and the whistleblower who revealed the Ukraine scandal — polarizing picks who moderate Republicans aren't eager to call. So he has a simple message for his party: end the trial before witnesses are called.

Senate Majority Leader Mitch McConnell has warned Republicans not to divide the party and endanger his slim GOP majority, but Paul's play could be useful to him. If the pressure campaign stifles the small group of Republicans open to hearing from witnesses like former national security adviser John Bolton, McConnell will be able to conclude the trial in the swift fashion he's long sought.

But if a majority of the Senate agrees to hear witnesses, Paul is ready to go all out to make sure everyone in the Senate is on the record about whether they stand with Trump.

"My first preference would be to be done with it as soon as possible and not to have any witnesses," Paul said. "If they insist on having people like Bolton coming forward, my insistence will be not just one witness. But that the president should be able to call any witnesses that he deems necessary to his defense."

Paul's threat is backed up by real power under the process envisioned by McConnell and allowed for under Senate rules.