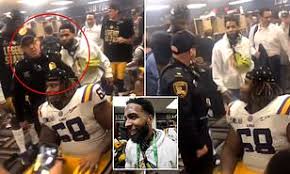 An arrest warrant has been issued for Odell Beckham Jr. after a video posted on social media showed him slapping a Superdome guard's butt on Monday night

Near the end of the clip, Beckham winds up and slaps the officer's butt

The officer then spins around and approaches Beckham, who is seen dancing

New Orleans police sought a warrant for misdemeanor sexual battery, but the arrest warrant that was released was just for simple battery

Beckham's post-game antics also drew the attention of LSU, which is investigating cash gifts to players after the win - a potential NCAA violation

Is This Some Kind of Joke?