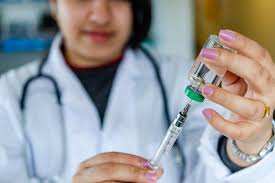 Relias Media, self-proclaimed as a "trusted source for healthcare information," releases this headline story: "Given the nation's antivaccine movement and the annual safety myths and efficacy quibbles about the seasonal influenza vaccine, public health officials are keeping it simple this year: CDC: Flu Vaccination Can Keep You Out Of The Hospital, Morgue."  In my lifetime, I have never known of a single person who died of influenza.  Yet the annual mortal threat posed by the flu seems like an imagined pandemic every flu season.

NBC-News posts a report entitled "Here's why doctors urge people to get the flu shot every year" with an accompanying video story of a 4-year-old who became ill with flu and developed swelling of the brain and lost some of her vision, which may or may not be permanent, the report says.  But the headline reads: "Mother's warning after flu leaves 4-year old blind."  Video footage shows a child who certainly has some functional vision.  The news report appears to be a scare tactic.  A major news agency is doing the bidding of the vaccine makers.

Another online political news portal, The Hill, ran with the NBC story with a headline that reads: "4-Year Old Who Wasn't Vaccinated Against Flu Goes Blind From Virus."  And so it goes in our dystopian "fake" news era.  Fiction becomes non-fiction.