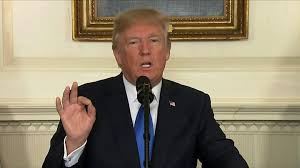 The first response came in the form of a Donald Trump largely incoherent nine-minute self-applauding speech explaining what he had done and why. It was followed by a House of Representatives War Powers non-binding resolution that was all theater and did nothing to limit the president's unilateral ability to go to war with the Islamic Republic.

It was reported that the Trump speech had been hurriedly written by aides the night before it was given and that it existed in several competing drafts. It was full of out-and-out lies and half truths and intended to reassure the American people that the president was keeping them safe. The opening line might well be regarded as some kind of joke: "As long as I am President of the United States, Iran will never be allowed to have a nuclear weapon." Trump has in fact done more to ensure that Iran will have a nuclear weapon than any other president through his abrupt withdrawal from the Joint Comprehensive Plan Of Action (JCPOA) and his assassination of Soleimani, which together have convinced the Iranian leadership that there is no possibility of a reasonable negotiated solution when dealing with the American president, even when he claims he wants to "talk."

Trump then went on characteristically to eulogize our brave soldiers on far flung battlefields before lying again, saying "For far too long — all the way back to 1979, to be exact — nations have tolerated Iran's destructive and destabilizing behavior in the Middle East and beyond. Those days are over. Iran has been the leading sponsor of terrorism, and their pursuit of nuclear weapons threatens the civilized world. We will never let that happen."