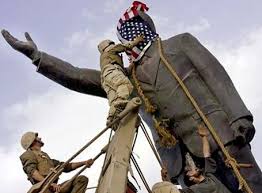 The murder of senior Iranian military commander Qassem Soleimani suddenly shone a strobe light on 'independent' Iraq, and what we saw was not pretty.

Welcome to the new Imperialism 101.

Iraq's population is estimated around 39 million. The pre-war Iraq of 2003 was broken into three parts by the US-British invasion: the Shia majority; Kurds in the north; and Sunnis, with scatterings of other ethnicities. Iraq remains fragmented into hostile groups.

Its Shia are confusingly allied to the US and Iran. The killing of Maj. Gen. Soleimani by the Americans has thrown this alliance of convenience into confusion. Iraqi Kurds are close to the CIA and Israel's Mossad intelligence. The Sunnis are left adrift, without any foreign patrons except for other feeble Arab states.

The US maintains a modest garrison of 5,000 infantry in Iraq and 3-5 air bases, as well as the gigantic fortified US Embassy in Baghdad's heavily guarded Green Zone which contains one of the world's largest CIA bases. Angry mobs demonstrating in front of the embassy triggered off the chain of events that led to Trump's murder of Gen. Soleimani. That an impeached president should be murdering foreign figures is a question that Congress must ask.

Before he was murdered, Osama bin Laden called this monster Baghdad embassy and its twin in Kabul, `crusader fortresses.' That is indeed their role, and to serve as the nerve center for all Mideast operations by the US. Iraq enjoys some of the world's largest oil reserves. Where the profit from Iraq's mammoth oil exports go remains a closely guarded secret.