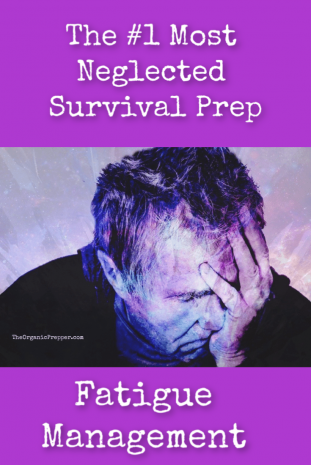 Dealing with a disaster is often exhausting and staying alert can be especially challenging during a prolonged crisis. However, strategies to stay in top form during and after calamities are not something that most people think to include in their emergency preps.

Sleep deprivation, stress, and other issues that are commonly associated with disasters often lead to survivor's burnout.  If not properly managed, this fatigue can compound existing problems when the crisis lingers for days, weeks, months, or longer.

This article will address one of the most critical aspects of survivor's burnout: sleep deprivation.

At one time or another, most of us have functioned quite well without sleep and we didn't burn the house down, drop the baby, or get into a wreck. We usually managed to do whatever we had to do, regardless of how tired we were. But how well will we perform during an intensely stressful or prolonged disaster event?  We may survive the initial crisis then fail miserably because of mistakes made when we are fatigued.

Sleep deprivation can be deadly

Statistics that link serious mistakes to sleep deprivation are astounding. A look at a few surprising details about them will show why it is a good idea to be well prepared to fight this potentially deadly impairment that can strike when we least expect it to happen

The surprising thing is, many accidents usually occur when we think we are in total control.

But it is no surprise that tired workers are 70% more likely to be involved in accidents than well-rested workers. Fatigue contributes to a large number of accidents on the road as well.

It is particularly noteworthy to consider that some of the world's most horrific disasters in history were caused by highly skilled people who excelled in their professions, but were working while fatigued. Here are just a few of many disasters that have been linked to fatigue and sleep deprivation:

-The Exxon Valdez Oil Spill on March 24, 1989, was one of the worst man-made environmental disasters in history. As a result of sleep deprivation, hundreds of miles of coastal ecosystems were affected when 42 million liters (11 million gallons) of oil spilled into the water off the Alaskan coast. The person at the helm of the supertanker Valdez had only slept six hours in two days before colliding with a familiar reef that was well known by every ship's operator on that route.

-An investigation of the Three Mile Island nuclear reactor disaster on March 28, 1979, concluded that sleep deprivation was a factor. As a result of the accident, many people in the area fell ill and a significant number of animals and plants died.

-The Challenger space shuttle explosion on January 28, 1986, was linked to fatigue and sleep loss which contributed to the fatal launch that killed everyone on board.

-One of the most horrific nuclear disasters in history occurred in the Chernobyl Nuclear Power Plant in the Soviet Union on April 26, 1986. It is believed to be caused by a series of mistakes made by fatigued workers.

There are many more accounts of disasters caused directly or indirectly by fatigued, but otherwise highly skilled people.

If we don't take rest breaks, our minds may take total leave of absence without our consent.

Prepping for Normal People on a Tight Budget-Which food to Buy & Grow in 2020...

OBLIVIOUS: People are telling me they are "fully prepared" because they have 2-3 weeks of

No, You Don't Need To Panic-Buy Toilet Paper Because Of Coronavirus