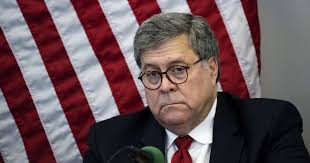 The shooter, Mohammed Saeed Alshamrani, had two iPhones, and the FBI quickly got court approval on probable cause to search the devices, Barr said in prepared remarks discussing the government's investigation. The attacker shot one of the phones, but the FBI was able to fix the device, he said. The second phone was also damaged but fixed. Alshamrani died during the incident, and the handsets were locked with passwords and encrypted, so the FBI can't access information on the devices.

"It is very important to know with whom and about what the shooter was communicating before he died," but the devices are "engineered to make it virtually impossible to unlock them without the password," Barr said. "We have asked Apple for their help in unlocking the shooters iPhones. So far Apple has not given us any substantive assistance."

Tech companies and governments have clashed for years over balancing law enforcement access and user privacy. The latest encryption technology used on iPhones and other smartphones has increased this tension because the devices have become a lot harder for outside experts to hack into.

Who else did the Saudis hack on WhatsApp?

Pentagon racks up $35 trillion in accounting changes in a year

Bokhari: Leftists Are Learning that Big Tech Already Has a 'Social Credit' System

Study: CDC's Vaccine Schedule May Be Harmful To Children

"2nd Amendment Has Nothing To Do With White Nationalism" -Ben Swann

France: Ongoing Yellow-Vest Protests Against Pension Cuts Is a Growing Conflict with No ...