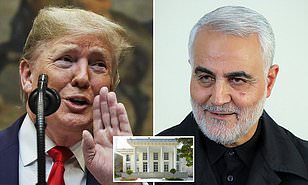 Even as Trump was rage-tweeting on Jan 4, two days after the killing of Iran's top military leader Qassem Soleimani, that he would hit 52 targets including Iranian heritage sites for potential retaliation if America suffered losses following an Iranian attack, warning that "those targets, and Iran itself, WILL BE HIT VERY FAST AND VERY HARD", the US president was busy, secretly using an encrypted back-channel to bring the world back from the brink of war.

As the WSJ reports, just hours after the U.S. strike which killed Iranian Maj. Gen. Qassem Soleimani, the Trump administration sent an urgent back channel message to Tehran: "Don't escalate." The encrypted fax message was sent via the Swiss Embassy in Iran, one of the few means of direct, confidential communication between the two sides, U.S. officials told the WSJ. Then, in frantic attempts to de-escalate even as top US and Iranian leaders were stirring patriotic sentiment and nationalistic fervor, the White House and Iranian leaders exchanged further messages in the days that followed, which officials in both countries described as far more measured than the fiery rhetoric traded publicly by politicians.

It worked: a week later, and after a retaliatory, if highly theatrical, Iranian missile attack on two military bases hosting American troops that purposefully inflicted no casualties, Washington and Tehran have stepped back from the brink of open hostilities (for now).

"We don't communicate with the Iranians that much, but when we do the Swiss have played a critical role to convey messages and avoid miscalculation," a senior U.S. official said.

While a spokesman at Iran's mission to the United Nations declined to comment on the exchanges, he said "we appreciate [the Swiss] for any efforts they make to provide an efficient channel to exchange letters when and if necessary." Another Iranian official said the back channel provided a welcome bridge, when all others had been burned: "In the desert, even a drop of water matters."

In retrospect, it should hardly be a surprise that the perpetually neutral Swiss were the last recourse to prevent potential war.

As the WSJ notes, from the Swiss Embassy, a Shah-era mansion overlooking Tehran, the country's role as a diplomatic intermediary has stretched through four turbulent decades and seven presidencies, from the hostage crisis under Jimmy Carter to Barack Obama's nuclear deal. But it was seldom tested like this.

Here's how it happened.

The first American fax was sent immediately after Washington confirmed the death of Soleimani, the most important figure in Iran's Islamic Revolutionary Guard Corps, the U.S. officials said. It arrived on a special encrypted fax machine in a sealed room of the Swiss mission - the most enduring, and secret, method since the 1979 Islamic Revolution - for the White House to exchange messages with Iran's top leadership, especially when the two nations are concurrently parading in public media in their bellicose propaganda to earn political brownie points.