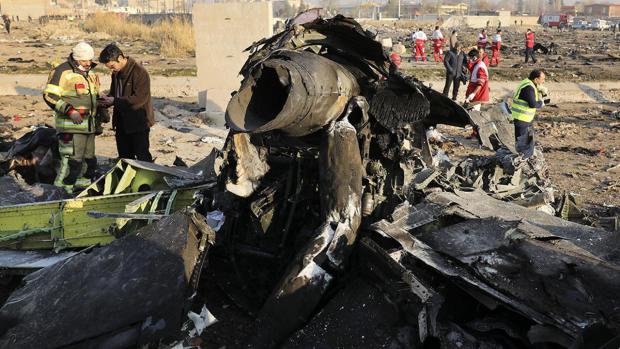 Update: More suspicious details have surfaced over the past few hours as investigators take the first hard look at the circumstances that caused a Boeing 737 to plunge out of the sky minutes after takeoff.

Bloomberg reports that foreign investigations into what happened will undoubtedly be hindered by the regime, particularly amid rising tensions with Washington. Meanwhile, more evidence as emerged to suggest that the jet was a victim of a misfiring of Iran's missile defense system.

As theories multiplied, the Ukrainian embassy in Tehran amended an earlier statement on its website, in which it ruled out terrorism. Instead, it offered 'no comment' on possible causes.

Country of origin of those killed, according to Ukraine's foreign minister:

"An investigation will be conducted with the involvement of the aviation authorities of Ukraine, Iran, representatives of the Boeing manufacturer, the airline, and the National Bureau of Air Accidents Investigation of Ukraine," Ukraine International Airlines said in a statement.

The crash brought to mind the 2014 downing of a Malaysia Airlines jet by a surface-to-air missile while flying over Crimea, which was eventually blamed on Russian-backed rebels.

Iran's Disaster Mitigation and Management Organization said early assessments indicated the cause was a technical issue.

The plane came down at 6:18 a.m. Wednesday in Sabashahr, near the Iranian capital.

Under established protocols, Iran would lead any investigation because the crash occurred on its soil. Ukraine Prime Minister Oleksiy Honcharuk said his government has informed Iran that its experts should take part, though early reports suggest that Tehran is moving to block Kiev from seeing the full truth.

The coverup is so obvious it's almost embarrassing.

Iran will reportedly refuse to hand over black box data from the Boeing 737 that crashed over Tehran last night to Boeing, stoking speculation that the aircraft was shot down by an Iranian missile.

Video of wreckage from the crash, which shows shattered bodies and debris spread over a wide area, has surfaced on social media.

EXCLUSIVE: Goldman Sachs Issues Coronavirus Alert - Are You Prepared For What May Come?

Conway says Bernie's 'electability' is no match for Trump's 'electricity'

Couple Facing DEATH PENALTY For Seasteading SPEAKS OUT! - What You NEED To Know