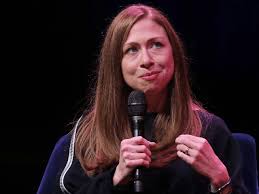 Chelsea Clinton has raked in $9 million in the past decade for serving on the board of a media and internet investment company controlled by her mother's friend.

The former first daughter's shares in IAC/InterActive Corp were valued last week at a whopping $8.95 million, according to financial publication Barron's.

The company, which has an ownership stake in 150 brands like Vimeo and Tinder, is run by billionaire businessman Barry Diller.

The billionaire, who is the longtime partner of designer Diane von Furstenberg, is a good friend of Chelsea's mother Hillary Clinton.

Shares in IAC have surged in recent years.

She reported owning the equivalent of 35,242 IAC shares at the end of December.

Hillary Clinton Shuts Down Rumors of Being Bloomberg's Running Mate: 'Oh, No'

Will Censorship Prevail over the First Amendment?

The CIA's Role in Operation Condor

Has the Constitution Failed?

SpaceX will launch humans to space for the first time

SpaceX to launch four private passengers into orbit around Earth by as soon as late 2021...

Hundreds of organs get 'lost in transit' in US every year, delaying life-saving transplants.