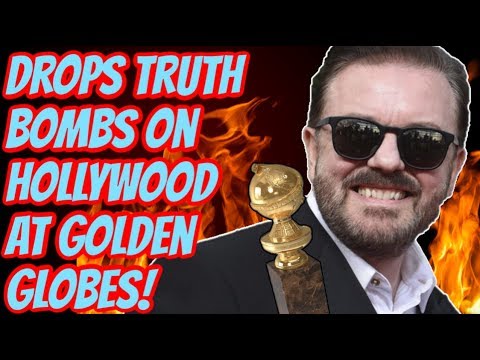 Ricky Gervais had a scathing message for the liberal Hollywood elites in his opening monologue of the 2020 Golden Globes: "F*** off."

It was a moment that conservatives had been waiting for.

In his last hurrah as Golden Globes host, the creator of the original "The Office" television series went off on liberal celebrities.

And Gervais spared almost no one.

He recapped 2019's hotbutton issues and slammed far-left "woke" celebrities for all their lies and hypocrisy.

His message was loud and clear — and it left conservatives cheering.

You can watch him shred Hollywood below:

"Most of you spent less time in school than Greta Thunberg, so if you win, come up, accept your award, thank your agent and your God and (expletive) off," he said, referring to the teen climate change activist.

Gervais said the audience full of powerful TV and movie executives were all "terrified" of journalist Ronan Farrow, who won a Pulitzer for his reporting on disgraced Hollywood mogul Harvey Weinstein, who goes on trial in New York City on Monday for sexual assault.

Gervais told the crowd about Farrow: "He's coming for you."

Communism In The United States? Say Goodbye To The Constitution!

Is 5G a Deadly Trigger for the Coronavirus?

No Need For Hard Quarantine in Russia, Which Closed Its Border Back in January