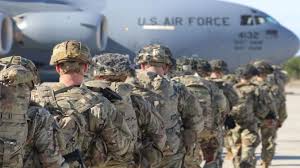 From the National report:

Parliament voted on a five-point action plan that would require the Iraqi government to end the presence of foreign troops in the country, and withdraw its request for assistance from the anti-ISIS global coalition. This would require new legislation to cancel the existing agreement.

Parliament also called on the government to ban the use of Iraqi airspace by any foreign power.

The Iraqi foreign minister has been directed to head to the UN to lodge an official complaint against the US strike.

The Iraqi Prime Minister and the whole cabinet supported the resolution.

Before the vote Prime Minister Adil Abdul-Mahdi told the parliament that he was scheduled to meet with Soleimani a day after his arrival to receive a letter from Iran to Iraq in response to a de-escalation offer Saudi Arabia had made. The U.S. assassinated Soleimani before the letter could be delivered by him. Abdul-Mahdi also said that Trump had asked him to mediate between the U.S. and Iran. Did he do that to trap Soleimani? It is no wonder then that Abdul-Mahdi is fuming.

Foreign troops in Iraq included about 5,000 from the U.S. as well as a number of other NATO countries engaged in training Iraqi troops. There are also Turkish troops in north Iraq who fight against the PKK. Those will also have to leave but may not do so voluntarily.

Without any bases in Iraq the U.S. position in Syria will become untenable.