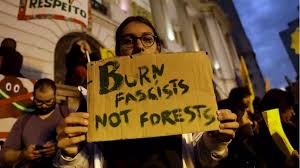 Outrage levels previously reached dangerous highs during the Bush administration, but Obama was able to reverse the trend. He didn't change much about the way Bush was handling things, but he was a Democrat, so outrage levels went back down as the press stopped reporting on scandals and corruption.

However, in 2016, global outrage reached record highs, especially among Democrats. Republicans had been mildly outraged during the Obama years but mostly had to go to work so didn't have much time to spew toxic, harmful outrage into the environment. Libertarians have generated almost no outrage since they are high all the time.

Experts believe the reelection of Trump in 2020 would be "catastrophic," catapulting outrage levels well into the stratosphere.

"If we do not cut our anger emissions immediately, the world will be consumed by fiery outrage by the end of next year," said outrage expert Dr. Hal Gourd, pointing to a hockey-stick graph.