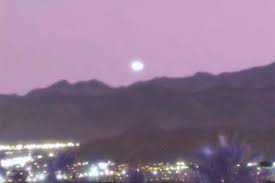 A conspiracy theorist claims to have captured a huge UFO hurtling at 1,000mph over Las Vegas – and says several other witnesses saw it.

YouTube user UFOs over Vegas posted the bizarre footage on December 19, where it has since become a viral sensation with 135,000 views.

The clip begins with a huge bright object slowly moving up from the mountains surrounding the Nevada city.

"This thing looks big and a long way away," he says.

The object then lifts up into the sky and – when it appears to reach its altitude – it starts speeding up.

"Once it starts moving, it is going to haul a***," he continues. "This thing is moving, no sound."

The mysterious object repeatedly flashes blue as it hurtles over the bustling region.

According to the YouTube user, four witnesses saw the same object and described it in exactly the same detail.

Inside the Pentagon's Secret UFO Program

Will Censorship Prevail over the First Amendment?

The CIA's Role in Operation Condor