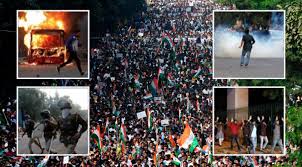 CAA is a measure that the Modi government passed into law last Wednesday that allows amnesty to only non-Muslim illegal immigrants from Pakistan, Bangladesh, and Afghanistan. The result of the controversial new citizenship law considered by many to be discriminatory against Muslims led to violent protest late last week and through the weekend.

Christians, Buddhists, Sikhs, Jains, and Parsis from the three eligible countries can now receive citizenship if they have illegally entered India though Muslims from the same countries cannot.

The protest ban is a police order that prohibits more than four people from assembling. Still, tens of thousands of people ignored the government's call to stand down and have been demonstrating this week, especially in regions of Bangalore, Hyderabad, Patna, Chandigarh, and Delhi.