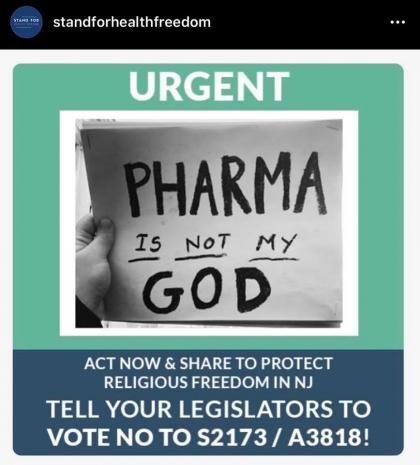 On Thursday, December 12, the New Jersey Senate Health Committee held a hearing on bill S2173 that will repeal the religious exemption to vaccination. The bill passed out of the 10-member committee with a vote of 6 to 4 in favor of sending the repeal of the religious exemptions to the floor. It will be voted on in the Senate on Monday, December 16th and is expected to pass.

S2173 contains no carve-outs for special needs students entitled to a free and appropriate public education under federal law. There are no carve-outs for private, religious schools. It will apply to daycare, primary school and higher education. There is no upper-age limit for the repeal. Unlike New York or California laws, the New Jersey law would apply to higher education. Thus, under the terms of the law, a 60-year old taking a cooking class at a community college could be required to prove vaccination status before enrollment. This could include even online courses at any institution of higher education in New Jersey.

There were hundreds of people at the hearing, outside, in overflow rooms and in the hearing room.

There was impassioned testimony from a diverse group of individuals including a rabbi, a priest, the mom of a child who died from vaccine injury, Del Bigtree, myself, and many others.

Those concerned for health freedom and vaccine safety should be gravely concerned about the breadth and potential impact of New Jersey's S2173.

CHD will be providing updates on the situation in New Jersey. Other sources include the New Jersey Coalition for Vaccine Choice and Stand for Health Freedom.