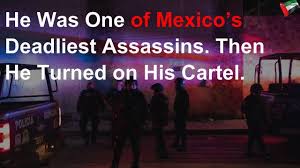 "How many of you have killed someone before?" one of the instructors asked. A few hands shot up.

The trainers separated, revealing a naked corpse face up in the grass. One thrust a machete into the nearest man's hand.

"Dismember that body," he ordered.

The recruit froze. The instructor waited, then walked up behind the terrified recruit and fired a bullet into his head, killing him. Next, he passed the blade to a lanky teenager while the others watched, dumbfounded.

The teenager didn't hesitate. Offered the chance to prove that he could be an assassin — a sicario — he seized it, he said. A chance at money, power and what he craved most, respect. To be feared in a place where fear was currency.

"I wanted to be a psychopath, to kill without mercy and be the most feared sicario in the world," he said, describing the scene.