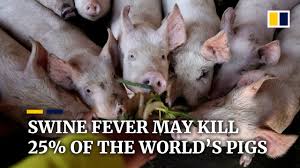 In some cases, the gangs have spread rumors about the virus which is not deadly to humans - but causes hemorrhagic fever in pigs which is almost always fatal.

Sometimes they spread rumours about the disease spreading in the locality and may even leave dead pigs on the side of a road to make farmers believe the infection is spreading. -SCMP

In more extreme cases, however, the gangs use drones to drop infected items into the farms.

"One of our branches once spotted drones air dropping unknown objects into our piggery, and later inspection found [the] virus in those things," said one farm manager.

Once the sick pigs have been acquired by the gang, they are then smuggled to other areas with sky-high pork prices, violating a ban on transporting pork or livestock between provinces, and sold for a profit as high as $143 per pig.