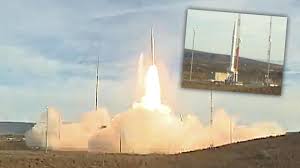 A week after Russia's President Putin said he is ready to extend the New START nuclear arms reduction pact with the United States "without preconditions" by year's end, in an attempt to save it after the recent collapse of the Intermediate-Range Nuclear Forces (INF) treaty, the Pentagon has conducted another test of a previously banned ballistic missile.

Thursday's test-firing marks the second missile to be tested which would have fallen under the INF ban, which the Trump administration withdrew from earlier this year. The first test had taken place in August, during which time Putin said Russia will be forced to deploy banned missiles if the US does.

Video footage of this week's test, like the one in August, was made public. The ground-launched missile reportedly few over the Pacific Ocean.

Carver indicated the missile tested "terminated in the open ocean after more than 500 kilometers of flight. Data collected and lessons learned from this test will inform the Department of Defense's development of future intermediate-range capabilities." Crucially, the INF Treaty had specifically banned land-launched missiles with a range of 500 to 5,500 kilometers.