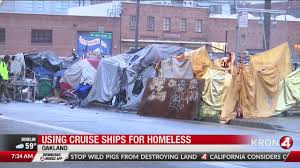 During a meeting last week, Kaplan told members of the city council that she has already been in contact with cruise ship companies about the possibility of using their vessels for emergency housing for the city's homeless.

"Maybe we can have a way to create a thousand housing units overnight," Kaplan said of the program, adding that her plan will come at "no or low" cost because the city would not be purchasing the boat, but simply renting it, and requiring the residents to contribute towards the rental fee based on their level of income.

It may sound counterproductive to charge homeless people for a place to stay, and perhaps it is, but even homeless shelters require a small fee of their residents, and the housing will likely be far more affordable than most apartments or hotels.

"It could be a great way to house a lot of people quickly. Cruise ships have been used for emergency housing after natural disasters and for extra housing for things like Olympics," Kaplan told the San Francisco Chronicle.

Kaplan suggested that the ship could work similarly to the Queen Mary in Long Beach, a large old ship that is now docked in the harbor, acting as a hotel for tourists and other visitors to the area.

Democrats Are Selling Their Souls In Desperation To Defeat Trump, Bloomberg Is Buying The Election

Japan Isn't Headed for Recession, It's In Recession