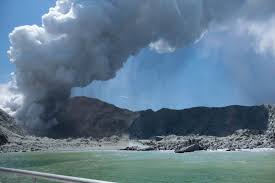 Volcanic tremors rose in the morning, accompanied by an increase in the amount of steam and mud being released at White Island, the GeoNet seismic monitoring agency said.

"We interpret these signals as evidence of continued high gas pressures within the volcano," the agency said. "The situation remains highly uncertain as to future activity. Eruptions in the next 24 hours are still likely to occur."

Six deaths were confirmed after Monday's eruption. Five people died at the time of the blast or soon after, while a sixth person died Tuesday night at an Auckland hospital.

Another eight people are believed to have died, with their bodies remaining on the ash-covered island for now. And 30 people remain hospitalized, including 25 in critical condition. Many of the injured suffered severe burns.

Bruce Bird, an acting assistant police commissioner, said they were monitoring the situation hour by hour.

"Safety for our staff is a huge priority for us," Bird said. "And we've got to get this right."