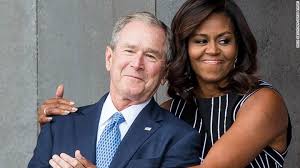 Speaking on the Today show on Tuesday, the former first lady, 55, said that while she and Bush, 73, may disagree on matters of politics, they actually have plenty in common — something that's true of most people, she believes.

The two have gotten to know each other quite a bit over the past decade, as presidents and first ladies belong to a pretty exclusive club and pop up at the same important events.

'I had the opportunity to sit by your father at funerals, the highs and the lows, and we shared stories about our kids and about our parents,' Michelle told Jenna.