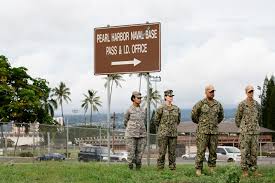 Gabriel Romero was identified as the U.S. sailor who shot three Department of Defense civilian workers at the Pearl Harbor Naval Shipyard, killing two. Another victim is being treated at a local hospital. Romero, 22, then killed himself with his service gun.

Romero, a submariner, was officially identified by the military Friday. He was on-duty at the time of the shooting and was assigned to stand watch on his submarine, officials said during press conference. Prior to the shooting, he faced disciplinary problems at work, according to Hawaii News Now. He was also enrolled in anger management courses.

Romero was an active-duty member of the U.S. Navy. He was assigned to the USS Columbia, a nuclear-powered fast attack submarine. He used his service weapon to commit the shooting, firing shots at three civilians, killing two and injuring a third.

The shipyard was on lockdown for nearly two hours on Wednesday, December 4, 2019, starting about 2:15 p.m. local time. The access gates were closed. The lockdown was lifted about 4:10 p.m. The shooting occurred near Drydock 2, one of the four shipyards on the base. The base is located about 8 miles from Honolulu. All three of the victims were male shipyard workers.