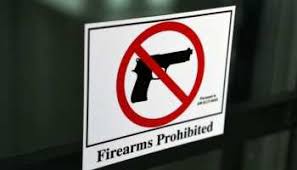 Breitbart News reported that a gunman opened fire Friday morning in Pensacola, killing three innocents and causing numerous others to be transported to the hospital for injuries.

He used a handgun to carry out his attack.

Pertinent to news of this horrific firearm-based attack is the fact that Naval Air Station Pensacola is a gun-free zone.

The policy also points out that "state issued 'concealed weapons permits' are not recognized on any Navy installation."