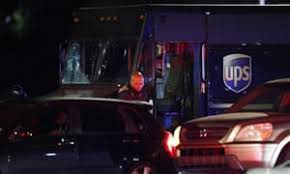 The suspects led police on a two-county rush-hour chase through Miami and ended in a hail of gunfire on Miramar Parkway and Flamingo Road in Miramar.

The incident began around 4 pm Thursday in Miami-Dade County, where two people attempted to rob a jewelry store on the Miracle Mile.

The suspects then hijacked a UPS truck, abducting its driver, Hudak said.

Hudak said the chase went on for about 20 minutes during rush hour in Miami.

Chopper 4 captured the video of the chase. There was even video that went viral on social media showing at least 20 officers, some with assault rifles, engaging in an epic gun battle with suspects on Miramar Parkway and Flamingo Road.