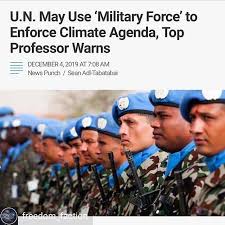 Now, the United Nations is in the same predicament with nations not adopting its bogus climate change agenda. This gives expression to Al Gore's statement 'deniers deserve to be punished. ? TN Editor

Action to address climate change has been left so late that any political response will likely become an international security issue — and could threaten democracy.

That's the view of Ole Wæver, a prominent international relations professor at the University of Copenhagen, who also says climate inaction could lead to armed conflict.

"At some point this whole climate debate is going to tip over," he tells RN's Late Night Live.

"The current way we talk about climate is one side and the other side. One side is those who want to do something, and the other is the deniers who say we shouldn't do anything."

He believes that quite soon, another battle will replace it. Then, politicians that do 'something' will be challenged by critics demanding that policies actually add up to realistic solutions.

When decision-makers — after delaying for so long — suddenly try to find a shortcut to realistic action, climate change is likely to "be securitised".