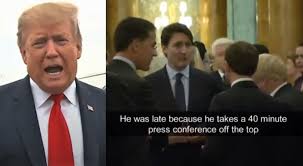 The leak by the Canadian Broadcasting Corporation of a clip showing Justin Trudeau, Emmanuel Macron and Boris Johnson caught on a hot mic appearing to ridicule President Trump at the NATO 70 year anniversary summit, appears to have made an already tense diplomatic situation, downright unbearable.

Shortly after Trump told reporters that Trudeau was "two-faced" in response to questions about the hot mic video, which reportedly was also a reference to the Canadian PM's "blackface" history, Trump tweeted that he won't hold a scheduled news conference to conclude the NATO summit, noting that he's spoken repeatedly to reporters at meetings with world leaders that past two days, and would leave the NATO summit early, heading to Washington at the end of the day's meetings.

Great progress has been made by NATO over the last three years. Countries other than the U.S. have agreed to pay 130 Billion Dollars more per year, and by 2024, that number will be 400 Billion Dollars. NATO will be richer and stronger than ever before.

Just finished meetings with Turkey and Germany. Heading to a meeting now with those countries that have met their 2% GOALS, followed by meetings with Denmark and Italy.