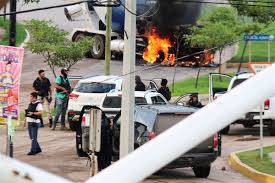 First, the economy is decelerating, second, murders across the country are hitting record highs, and third, there are small towns filled with Americans that cartels are now invading.

Mexico's economy entered a recession in 1H19, AMLO promised to "Make Mexico Great Again," though an economic downturn has unfolded and has derailed his beautiful plans of revitalization.

An imploding economy comes at a time of worsening cartel wars and record homicides, a story we've been documenting for the past five years. So far this year, 28,741 people have been killed as the socio-economic crisis deepens.

President Trump is ready to designate Mexican drug cartels as terrorist groups, and this will one day allow the US military to fight drug cartels on Mexican soil.

And as Bloomberg reports Tuesday, drug cartels have poured into San Miguel de Allende, a colonial-era city in Mexico's central state, home to 160,000 folks, and approximately 10,000 Americans and Canadians.

What's currently happening are violent drug gangs are now a demanding property tax on small businesses and have flooded the town with cocaine, resulting in turf wars and a jump in homicides.

The chaos began several months ago, but before that, the small town was peaceful. Now people are dying in a hail of gunfire every week.