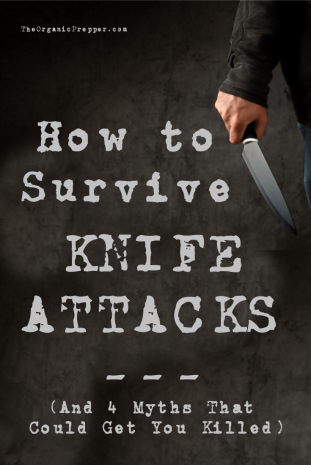 With knife attacks seemingly on the rise in the news, I thought I'd write an article to give you some ideas of what to do in case you're faced with a knife-wielding maniac. Keep in mind that this is super generic advice and some of this won't be at all applicable in some scenarios.

I've had several classes in knife fighting and disarms, etc, but don't think by any stretch that I'm an expert. As you can see for yourself on my blog, my expertise more in the intelligence gathering/protection and survival realm than hand-to-hand combat.

What relevant experience I do have, however, is in risk analysis and mitigation, which is more what you need to know if you aren't trained and practiced in defending against edged weapons, so that's what this article will focus on.

Myths and misconceptions about knife attacks

There are a lot of misconceptions about knife attacks to clear up first.

Myth #1) You can disarm him without getting cut/stabbed

Ok, so this is technically possible, but unlikely. One of the biggest hurdles to get over in a fight where your opponent has a knife is when you start bleeding. You might not feel the cut/stab due to the adrenaline in your system but you'll see and feel the blood. A lot of people freak out at this point because they've never been hurt in a fight that caused them to bleed so their brain will lock up and they'll hyper-focus on the wound and not getting stabbed anymore instead of dealing with the attacker.

Just assume you're going to get cut or stabbed during this fight and hopefully you'll keep your head in the fight when it happens.

One of the biggest things to focus on is protecting your vital parts such as your neck and chest. You may need to sacrifice your hands and arms in order to do this.

Myth #2) The attacker will lead with his knife-hand.

If you've ever seen a knife fight in the movies or on t.v., you'll see the bad guy holding the knife out in front as he tries to stab the good guy. The problem with this misconception is that when you go to a class to learn how to defend yourself unless you have an instructor who's been in ACTUAL knife fights, your lessons and practices will involve you defending against this type of attack.

This could set you up for failure.

Whereas this does happen sometimes, in most cases, the attacker will use his unarmed hand to keep you at bay and then grab you before he stabs you. He'll no doubt swing and stab with the knife but the actual attack isn't usually that forward. Make sure you practice with your opponent trying to get quick control over you before stabbing so you're more used to that. Sparring matches, with practice knives especially, are much more useful than watching YouTube videos, although the videos can give you some ideas of what to practice.