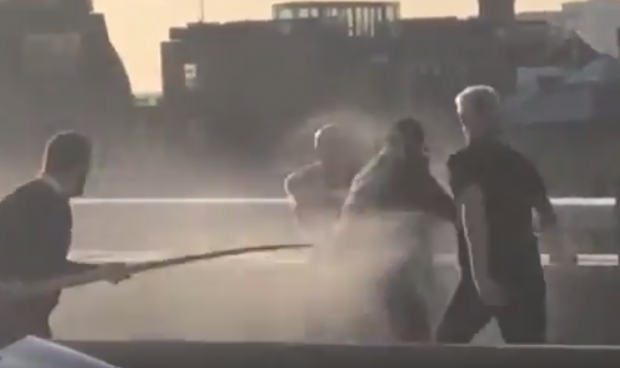 ISIS claimed responsibility for the attack (but then again, they often do this falsely). However, the attacker, Usman Khan, had recently been released from prison for his part in a plot to bomb the London Stock Exchange in 2012. He was certainly not rehabilitated, but ironically, he was at the site of the attack to help rehabilitate other terrorists.

The knife attack was stopped by civilians who used a remarkable array of improvised weapons, ranging from a Narwhal tusk (really!) to a fire extinguisher.

But nearly every article I've seen shared about this topic inevitably has comments like:

"A Glock would have stopped the whole thing faster."

"Too bad they had to use a Narwhal tusk to fight a terrorist. I carry a gun and a knife both."

"In the US someone would have just shot that guy."

This is both dismissive and somewhat unrealistic. Here's more information about how to survive a knife attack from a US Army combat veteran and he confirms that a gun is often not the best option.

Don't discount what these people did.

You know those people who make everything about their political agenda?  The ones who either blame President Trump for everything from wildfires in a state he hasn't been to in ages to hurricanes? Or the ones who blame guns for every problem in the United States? Or the ones who talk about "toxic masculinity" or "capitalism" being the root of our nation's problems?