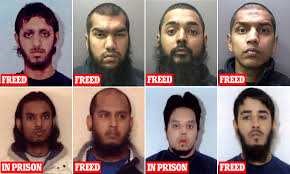 Six of the eight terrorist plotters who were jailed along with London Bridge attacker Usman Khan in 2012 have also been freed from prison, it has emerged.

The nine jihadists were members of an al-Qaeda-inspired cell which plotted to blow up the London Stock Exchange and kill Boris Johnson.

One is still in prison, another was convicted for a further terror plot and Khan is dead - leaving six back on the streets, it is believed.

Three of the nine - Khan, Mohammad Shahjahan and Nazam Hussein - were initially handed indefinite prison terms, but the trio won an appeal in 2013 which changed them to fixed sentences.

Allowing their appeal, former press inquiry chair Lord Justice Leveson found they had been 'wrongly characterised' as more dangerous than the others.

Khan was released in December 2018 after serving half of his fixed sentence - and the other two have also been freed, The Sun on Sunday reported.

Of the others, four - Shah Mohammed Rahman, Omar Sharif Latif, Gurukanth Desai and Abdul Malik Miah - have also been released from prison.