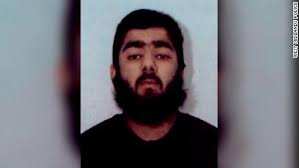 He was also a student and personal friend of notorious Islamist hate preacher, Anjem Choudary, whose private cell phone number was stored in Khan's phone at the time of his initial arrest.

Before his conviction for the LSE terror plot,  police had previously raided his home in Tunstall over concerns about his links to Choudary. -The Telegraph

"All these years later, and Anjem Choudary's one-time acolytes are still butchering members of the public on our streets," said terrorism expert, Dr. Paul Stott.

"Usman Khan was a loyal and integral member of Choudary's inner-circle and we know him to have been highly regarded by Choudary."

Khan — a British citizen born in the UK and of Pakistani origin — left school with no qualifications after spending part of his late teens in Pakistan, where he lived with his mother when she became ill.? On his return to the UK, he started preaching extremism on the internet and attracted a significant following.

The Complex Global Supply Chain Of Semiconductors Explained In One Chart