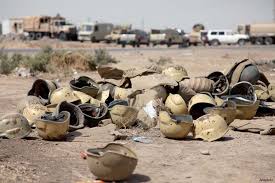 The American invasion of Iraq and the overthrow of that nation's government in 2003 has rightly been described as the greatest foreign policy disaster in the history of the United States. Eight thousand one hundred and seventy five American soldiers, contractors and civilians have died in Iraq since 2003 as well as an estimated 300,000 Iraqis. By some more expansive estimates the so-called "global war on terror," of which Iraq was the major component, may have directly killed 801,000, of which at least 335,000 were civilians. Other estimates indicate that the total dead from collateral causes, to include disease and starvation, could exceed 3 million, overwhelmingly Muslims.

The wars in Afghanistan and Iraq alone have also cost, according to the same Brown University study, an estimated $6.4 trillion and still counting as the money to pay for it was borrowed.

The invasion destabilized the entire region and shattered forever the relatively stable status quo whereby minority Sunni dominated Arab Iraq served as a check on Shia dominated Persian Iran's ambitions. The two countries had in fact gone to war in 1980-1988. The United States provided support to Iraq in that conflict, which killed as many as half a million military and civilians on each side.

Washington's Energetic Generals and the Emphasis on Preparation for Nuclear War