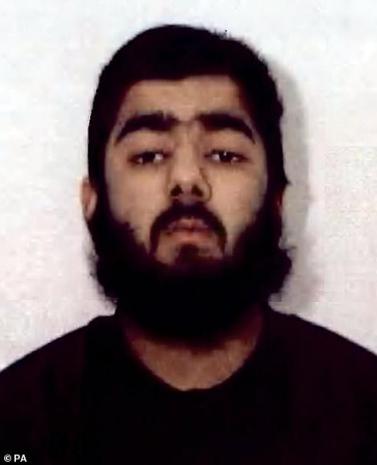 Usman Khan, 28, was jailed in 2012 for his role in an al Qaeda-inspired terror group that plotted to bomb the London Stock Exchange and the US Embassy and kill Boris Johnson.

In an old letter from 2012, unveiled today, the terrorist begged to be shown mercy and asked for a course to be arranged so that he could 'properly learn Islam and its teachings, and I can prove I don't carry the extreme views which I might have carried before.'

He wrote: 'I am much more mature and want to live my life as a good Muslim and also a good citizen of Britain.

'So if you could arrange something for me and send me the details, this would be truly appreciated.'

The letter emerged as one of the victims was revealed to be Cambridge University graduate Jack Meritt, the course co-ordinator for Learning Together, the education scheme run by the University of Cambridge's Institute of Criminology that Usman Khan had been attending yesterday afternoon.