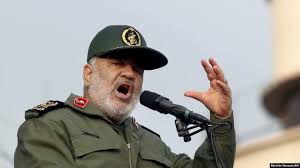 "We announce to the United States, Britain, Israel, and Saudi Arabia that you experienced us in the field and received strong slaps," said Gen. Salami, adding: "If you cross our red lines, we will destroy you."

"We will not leave any move unanswered," he warned, and said that if Iran decides to respond, "the enemy will not have security anywhere, our patience has a limit." The speech is being widely viewed as Tehran's 'victory lap' of sorts after anti-government protests across a hundred cities have been largely quelled.

He was addressing a mass pro-government rally at a moment that dozens of such 'counter-protests' were held across the country, in answer to the anti-fuel hike and anti-government protests which have gripped the country over the past two weeks.

State media featured the large government-supportive demonstrations in multiple cities early this week, seeking to underscore the Islamic Republic's leadership has emerged 'victorious' after quashing the mainstay of the prior anti-government rallies.

Footage showed protesters burning the American flag and chanting slogans which blamed the external interference of the US and Israel, and "seditious" elements for the Islamic Republic's current unrest, which had included a week of a total internet blackout ordered by authorities in Tehran.