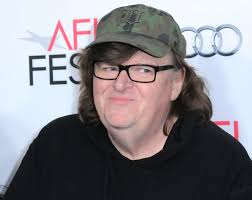 The 65-year-old anti-capitalist activist – known for far-left documentaries Bowling for Columbine, Fahrenheit 9/11, Roger & Me and others – shared his theory that America has made a tectonic shift to the left while discussing the Wednesday night debate with MSNBC.

"When you guys were talking about how we have to be more moderate, or move to the center, that's how we're going to win next year. See, to me, I think … I am the center," Moore said. "I am the mainstream now of the Democratic Party.

"The majority of Americans agree with me and Bernie on all of the issues, whether it's healthcare for all, whether it's climate change, minimum wage, mass incarceration," he said "Down the whole list, the American people have moved left, so the center is more of these sorts of things."

Where Have You Gone, Smedley Butler? The Last General To Criticize US Imperialism

Who Is Funding The Anti-Bernie Sanders Super PAC?

Carolina Hurricanes bring on their Zamboni driver, 42, as emergency goalie...