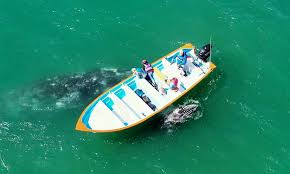 This is the moment a gray whale and her calf swam over to a fishing boat of wale watchers to say 'Hi' and get a stroke at a lagoon in Mexico.

Adventurer Erik Jones, 39, used a drone to capture stunning aerial footage of the gray whale gliding through the turquoise waters of the San Ignacio Lagoon, on the Baja Peninsula, alongside her calf, to the panga boat.

As the curious sea mammals approach the mother lifts her nose above the water and looks up.

One of the four people on board leans over the side of the boat to try and touch her.

A woman runs her hand through the water to encourage the adult whale to come closer and gives her a gentle stroke.

Appearing to love the attention, the mother whale starts spraying water in the group's faces.

The calf later somersaults in the water, while the mother rolls on her back to show off for the amazed whale watchers.

Mr Jones, of San Luis Obispo, California, said: 'Most of the time, the mothers push their young calves up to the boat to get touched by humans.'