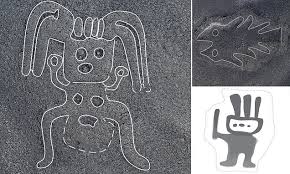 The Nazca lines of Peru have fascinated archaeologists for centuries and now scientists say they have discovered 143 new drawings previously hidden in the soil.

Featuring hundreds of pictures of animals, plants and patterns, the miles of figurative drawings are only visible from nearby clifftops and the air.

Researchers from Yamagata University in Japan spent years searching through high-resolution images of the lines taken from space and studying them on site in Peru.

This led to the discovery of previously unknown figures depicting a range of living creatures including birds, monkeys, fish, reptiles and humanoid characters.

Known as geoglyphs, they were created about 2,000 years ago, at the same time as the previously discovered lines and are between 16ft and 320ft across.

The research team from Japan, led by cultural anthropologist Masato Sakai, hoped to be able to uncover more detail of barely visible lines, as well as discover previously unseen figures.

They also set out to discover why the lines were created and believe some may have been used in ritual ceremonies.

Through painstaking image searches and on site surveys they found what they were looking for - over 140 new drawings.

The team believe that the Nazca people made the lines by removing the rocky black topsoil and revealing light-coloured sand underneath.