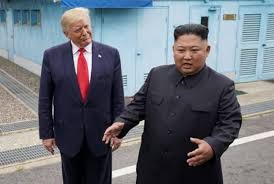 N.KOREA SAYS WILL NOT OFFER ANYTHING FOR US PRESIDENT TRUMP TO BRAG ABOUT - KCNA

N.KOREA SAYS URGES US TO DROP HOSTILE POLICY AGAINST IT IF IT WANTS TO CONTINUE DIALOGUE - KCNA

Statements from KCNA were made via Foreign Ministry adviser Kim Kye Gwan, who has recently called for US concessions ahead of a December deadline set by Kim Jong Un for President Trump to provide favorable terms to restore nuclear talks.

Gwan said North Korea wasn't interested in a summit with the US and called any future talks with the Trump administration "useless."

"If the US does not really want to let go of its dialogue with us, it should make a decision to withdraw its hostile policy of viewing us as an enemy," the KCNA statement said.

Gwan's statements came after the Trump administration canceled joint military exercises with South Korea. President Trump tweeted that Kim Jong Un needs to "act quickly, get the deal done" and suggested a summit could be nearing, saying, "See you soon!"