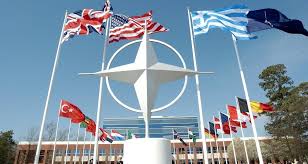 n... though we might note that when it previously bombed Belgrade, assisted in the occupation of Afghanistan, and toppled Libyan leader Muammar Gaddafi, any sense or concern for overstepping its mandate or 'mission creep' was clearly lost altogether.

As if seeking expansion into Eastern Europe, the Balkans, and potentially the Caucuses were not enough, now the Cold War military alliance is eyeing expansion into space. This is the focus of the following new report — not in The Onion but in Bloomberg — entitled, 'NATO Is Poised to Expand Its Remit to Include Outer Space' which introduces:

NATO intends to make space an "operational domain" along with air, land, sea and cyber, according to Secretary General Jens Stoltenberg.

The move, to be approved at a meeting of NATO foreign ministers on Wednesday, would bring all five areas within the scope of the alliance's collective-defense commitment and comes as member countries seek to address fresh internal political splits.