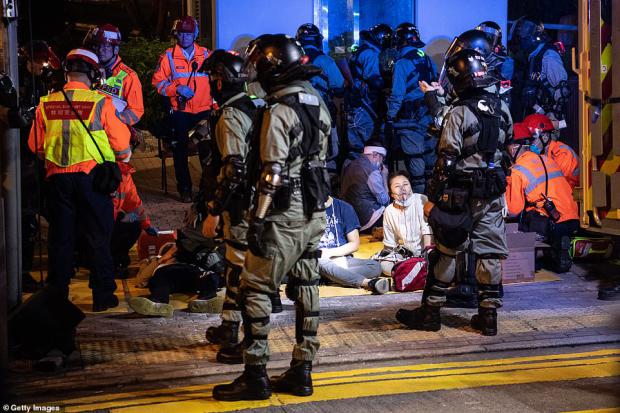 -Dozens were arrested as they tried to flee, despite earlier reports of a truce to allow activists out of campus

-Comes after the worst night of violence in almost six months of protests, with fire bombs and arrows used

Police fired tear gas and rubber bullets at protesters attempting to flee a Hong Kong university campus on Monday morning, trapping them inside after the worst night of violence the city has seen in almost six months of demonstrations.

Hundreds of students at Hong Kong Polytechnic University spent Sunday night attempting to stop police getting on to campus using fire-bombs and bows and arrows, but as day dawned on Monday many of the exhausted activists were trying to escape.

A group of around 100 students attempted to flee at daybreak with help from a second group advancing from outside, trying to break through a police cordon which has encircled the university.

But they were met with a wall of tear gas and rubber bullets, with officers swooping in and arresting dozens of people, battering them with batons or kicking them on the ground.