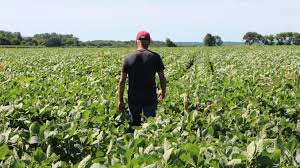 A new report from the Federal Reserve Bank of Kansas City shows that farm finances across agricultural states continued to weaken throughout the summer and into the early fall.

The survey touched on all of the key points in the industry: commodity prices, costs, leverage, production, real estate values and the effects of Trump's ongoing trade war. The report found:

Despite a slight increase in the price of some agricultural commodities and additional support from government payments, farm income and loan repayment rates declined at a modest pace. According to District bankers, agricultural economic conditions in the quarter were influenced by uncertainty about crop production, agricultural trade and other factors that contributed to commodity price fluctuations. Persistent weaknesses in the sector put further pressure on farm finances and signs of modest increases in credit stress remained. Farmland values, however, remained stable, and provided ongoing support for the sector.

Farm income in the region remained relatively weak and continued to decline, the report found.