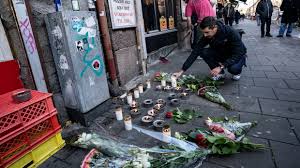 Explosions in Malmö, which is home to several no go zone migrant ghettos, are becoming commonplace, with the city suffering three blasts in the space of just 24 hours earlier this month.

An alarming 29 per cent of residents in Malmö say they have been victims of of crimes against an individual.

According to Wilhelm Agrell, professor of intelligence analysis at Lund University, the situation is so dire that it threatens the power monopoly of the Swedish state.

The vast majority of the unrest is driven by rival drug gangs made up of second and third generation immigrants.

Instead of taking bold measures to fight the gangs, Malmö police invited 12 gang leaders, 9 of whom turned up, to have a friendly chat over some pizza.

The gang leaders were told that they were "most at risk of being injured or killed," a sympathetic message which suggested police cared more about their welfare than that of their victims.