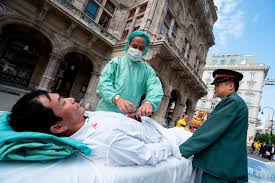 The research found that the Chinese government may have been "systematically falsifying" its organ donation numbers, raising renewed concerns over whether Beijing is still using executed prisoners and other forced donors for transplants for wealthy Chinese.

In 2015, China publicly promised it would no longer source organs from executed prisoners, who previously provided most of the transplanted organs in China.

But a study led by Australian National University PhD student Matthew Robertson that was published in the BMC Medical Ethics journal on Friday claims Chinese-government supplied datasets on organ donations show "highly compelling evidence they are being falsified."

"When you take a close look at the numbers of organs apparently collected they almost match this artificial equation point for point, year in, year out. They're too neat to be true," Robertson said.